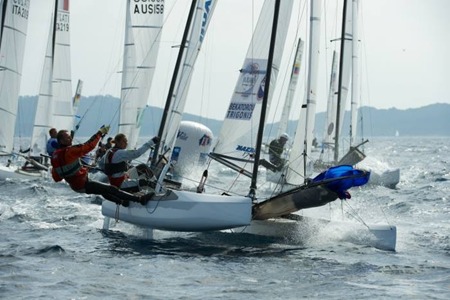 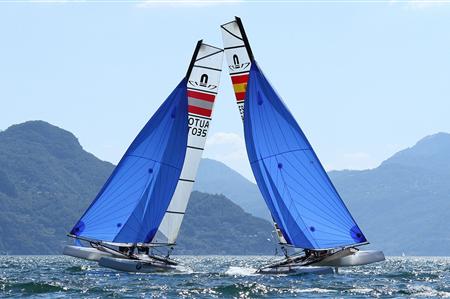 Since 1975 NACRA has been about empowering sailors. Getting the best out of yourself and your team with NACRA suppling the equipment. Reaching new heights and pushing your boundaries. That's NACRA sailing.

NACRA and Performance Sails are based in the Netherlands. The Dutch company took over the original factory (San Anna, California) in 2007, with all its rights concerning the NACRA brand. NACRA was originally founded in 1975, and draws in knowledge from a long history of designing, building and suppling catamarans to the world of sailing.

Two years straight, the boat won the "Most Efficient Catamaran Trophy" award at the Pacific Multihull Association's World Speed Trials.  1972, NACRA started out as an Alpha cat beside Prindle.  The first boat was the Alpha 18 and then the Alpha 15, which was a single handed boat and went on to sail in the One of a Kind regatta in Newport Beach.  Within this time frame, Tom Roland made a 18 foot cat that became the Nacra 18 square.

1975, Performance Cat Inc. came up with the NACRA 36 to promote the North American Catamaran Racing Association which is where the name NACRA came from.  A 36 foot speed machine did lots of promotion and is still going strong.  The NACRA 5.5 was born as a one up cat.  NACRA in the early 80's developed the 5.0 to also sell cats in the recreational market and this was quickly followed by the 5.7 and 5.8.

1985, Roy Seaman made all the original NACRA hull plugs and also developed the 6.0 to be the ultimate boat especially for the Worrell 1000 Extreme race.  The NACRA 6.0 won this race numerous times.  The first NACRA 6.0's had a self tacking jib and spinnaker.  At the end of the eighties the 5.5 rig was changed into a sloop.

1996, The formula 18 class was growing in Europe so NACRA launched the Inter 18.  For the NACRA Inter 20, it was only a matter of time.  Once in production, they were sometimes sold by the dozen.  By now, importers and NACRA dealers all over the world were distributing NACRA catamarans an NACRA was super successful in racing and recreational sailing cats.

The 21st century - judge for yourself where the history of NACRA has led us to today.  NACRA supplies boats and parts in large numbers through it's well established dealer network around the world. Whatever type of NACRA you might be interested in, we will always supply you with the best product available.

In May of 2012, NACRA reach the highest possible standard when it was chosen by elite sailors of the world as the exclusive Olympic Mulithull.  We will soon witness how the NACRA 17 will shine during the upcoming Olympics in Rio de Jaineiro, Brazil in 2016.

In 2015, NACRA will celebrate its 40th YEAR anniversary!

(California) 1968, Geoff Prindle decides to get into catamarans. That year he founded Surfglas with his partner, Sterling Santley.  He really got into the catamaran scene heavily and placed second at the USA nationals.

1971, Prindle 16 goes into production - light, strong and fast.  The Prindle could cut smoothly throgh the water because of its fine bow entry and was not as susceptible to pitch poling as other similar designs.